Edinburgh Festival 2012: Ylva Kihlberg – ‘I used to wish I didn’t have to go on’ 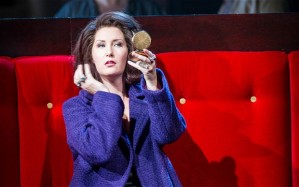 As someone who confesses to having battled with “devastating nerves”, Ylva Kihlberg doesn’t believe in making life easy for herself. The Swedish soprano makes her British debut at the Edinburgh International Festival this month, as Emilia Marty in The Makropulos Case, arguably the most complex role ever written by Leoš Janáček.

The enigmatic seductress is such a demanding role, and one on which the whole opera stands or falls, that Kihlberg might be tempted to call in the sports coach who helped save her career with a programme designed for elite athletes suffering from performance-crushing nerves.

“There’s no quick fix, I have to keep working at it. I’d find myself waiting to go on and wishing there would be a fire so I wouldn’t have to,” says the flame-haired singer candidly between mouthfuls of chicken salad. Dressed casually in cropped jeans, a gipsy blouse and a close-fitting grey jacket, the singer is taking a break from rehearsals at Opera North’s HQ in central Leeds.

Nothing, Kihlberg insists, could have prevented her from taking on the lead in The Makropulos Case, a role she has coveted since she played a smaller part in Janáček’s penultimate opera early on in her career. “It’s a challenge musically. The music is quite hard to learn. It doesn’t sound as complicated as it is. But it’s a dream role. I love Emilia. She has so many sides.”