Up in the air: US presidential race goes to the wire 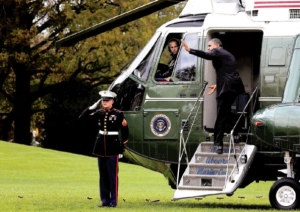 Dubuque, Iowa, is not the sort of place that normally hits the headlines. A small town ­situated at the point where Iowa, Illinois and Wisconsin meet, its population is just 58,000 and in 2010 it was voted Best Small City to Raise a Family.

But yesterday Dubuque was visited by not one, but two presidential candidates. Republican Mitt Romney arrived at noon and Democrat incumbent Barack Obama rolled in a few hours later. It’s a sign of how, after almost two years of campaigning and $6 billion (£3.75bn) spent, this election has come down to dogged hand-to-hand combat for every last street, town and state.

With the latest ABC/Washington Post poll showing Obama with 48.56 per cent and Romney with 48.49 per cent and with just two days to the election, both candidates are making a last frantic dash across America, visiting towns, big and small, in swing states, followed by their campaign teams and the press corps.

On Friday, Romney began making what his aides described as a “closing argument” to the electorate, inviting Americans to judge him on his record as a politician and his successes in business.

After a three-day break from campaigning to deal with the aftermath of Superstorm Sandy, Obama sprang back into election mode with a packed schedule and plans to visit eight swing states ­before Monday. The last week before the election has been a good one for Obama. On Friday, the latest report showed the US economy added 171,000 new jobs in September, robbing Romney of the attack line that Obama has presided over a net loss. Then the president was praised by New Jersey’s Republican governor Chris Christie for his handling of Sandy and received the ­endorsement of New York mayor Michael Bloomberg, a republican-turned-independent. The praise and endorsements are unlikely to win Obama votes in themselves but helped convey the impression of a candidate who is willing, and able, to reach across the party divide.

As Obama and Romney make the speeches, strategists and number crunchers on both sides are poring over the voting histories and demographics of individual counties and streets so that they can target the households they need to reach. These households are being deluged with television and radio adverts, and phone-calls and visits from campaign volunteers.

Both campaigns are focused on the various combinations of states they need to win to take them to the magic 270 electoral college votes required to secure the White House. While Romney and Obama remain tied in national polls, Obama holds a slight edge in the battleground states that are crucial to an election victory. Speculation is mounting that Obama could win Tuesday’s presidential election without winning the popular vote, as George W Bush did in 2000.

A variety of regional polls show Obama still has slight leads in four states – Ohio, Iowa, Nevada and Wisconsin – which, combined with the other states where he has a clear lead, would give him 277 electoral votes, barring any major upsets elsewhere. But in a race as tight as this, no-one is taking anything for granted.

Much of the focus is on Ohio which has emerged as the most hotly contested state in the Union. Voters in the ­“Buckeye State” could be forgiven for never wanting to see a presidential candidate again as both Obama and Romney target them with TV and radio ads, phone calls, emails and texts. As campaigning goes, this can seem like blanket bombing. The Republicans claim to have made 4.9 million phone calls and knocked on 2.3 million doors in Ohio alone. The Democrats say they have surpassed that, with more yet to be done.

On Friday, coaches filled with Democrat volunteers trundled out of Manhattan for the 900-mile trip to Ohio, where the volunteers will spend the final days before the election in Cleveland, Columbus and other towns and cities pounding the streets to turn out the Obama vote. A young volunteer dressed in a grey sweatshirt and jeans who said she had lost almost everything she owned after her apartment was flooded when Sandy hit New York on Monday, said: “There’s nowhere I’d rather be than volunteering for Obama this weekend, and making sure he wins this thing.”

Obama won Ohio with a margin of 4.6 per cent in 2008, but it went to the Republicans in 2000 and 2004. With 18 electoral college votes, Ohio offers the biggest prize among the battleground states after Florida’s 29 and Pennsylvania with 20.

The president’s federal bail-out of the car industry has made him popular in Ohio, where one in eight jobs is related to the car industry. But Romney is not willing to give up such a prize without a fight. Both men were in Ohio on Friday. Romney has spent millions of dollars there on a last-minute advertising blitz. An erroneous claim in one Romney TV advert that car-makers who benefited from the federal rescue were now exporting American jobs to China, is aimed at the white, working-class male voters both sides are so desperate to win over.

The electoral complexity of this stage of the contest has driven the various American media outlets into a competition of their own, to devise the most elaborate graphics to explain it. The New York Times has created a website called “512 Paths to the White House”, an interactive tool for working out each candidate’s numerous potential pathways to victory which politics geeks and anxious voters across the country are poring over.

Anyone looking for a real-life model to demonstrate the many different decisions taken by the American electorate as they choose their political destiny for the next four years could do worse than take the steps that lead down from 7th Avenue to Penn Station, the busiest train station in North America. A huge underground labyrinth stretching out over two city blocks, from 31st Street to 33rd, Penn serves up to a thousand passengers every 90 seconds.

As the working week draws to a close, Penn is buzzing with passengers from all over America and beyond, some of whom were left stranded after Sandy hit. Among the waves of commuters is Lou Jones, 40, from Virginia, one of the states Romney and Obama are vying for. “I don’t think either candidate is that great but of the two I think Obama would do a ­better job,” said Jones. Joe Stam, who lives in Maryland, voted for Obama in 2008 but plans to vote for Romney in Tuesday’s election. “I don’t necessarily like Romney but I think he’s the better candidate this time around. Obama hasn’t delivered, he’s more of a community organiser than a president,” he says.

Advertising executive Stephen Kosloff has been following the race and tracking the polls in minute detail, and says he is “cautiously confident” that Obama will win a second term. “There is a real chance that this will be one of those rare occasions that the president will win the election but not the popular vote. I don’t think that’s healthy for the country,” said Kosloff.

Talking to voters at this late stage in the race, it’s striking how many of them still haven’t made up their minds. The reasons they give include a lack of enthusiasm for ­either candidate and deep uncertainty over who is best qualified to tackle the many challenges facing the country.

Even now, roughly 6 per cent of the American electorate remain undecided. They include Rita Mendez. Standing ­under the departures board, waiting for her train to be announced, she said: “The election feels so far away from my life right now. My boyfriend is unemployed. We are struggling to pay the bills. I ­honestly don’t know if either [of the two candidates] can help us out.”

At Penn Station at the close of the day on Friday, a businessman stands in front of the departure board. As the crowds of commuters stream by him he checks left and right and peers up at the board again. He seems lost in an agony of indecision but he knows that his train is due to leave soon. It’s a situation that American voters can sympathise with.

Soon their agony, and the rest of the world’s, will be over.